How does it work? Automatics, computers, etc... > 34. Nonlinearity influence for regulation

Chapter 34. Nonlinearity influence for regulation
Chapter 34.1 Introduction
The most important influence for the control process is a saturation of the power amplifier.  The more general name of the power amplifier is a final control element or actuator. This element transforms control signal for power signal. Please note that all the remaining signals e.i. set point x(t), measured output signał y(t) or control signal y(t)  doesn’t require much energy.  And the nonlinearity of the  power amplifier is a saturation. Thus the chapter title should be more unambiguous “The  final control element  saturation influence for the control process”
I propose the reminder about transfer functions now. When you use the transfer it means that you are living in the linear objects world. The y(t) output  is proportional to x(t) input in steady states.

Fig. 34-1
The linear object characteristic in steady state.
But non steady state? There are ruling linear differential equations now. All the coefficients are constant, for example

Chapter 34.2.2 The linear element with the saturation
Call Desktop/PID/20_regulacja_i_nasycenia/01_nasycenie.zcos 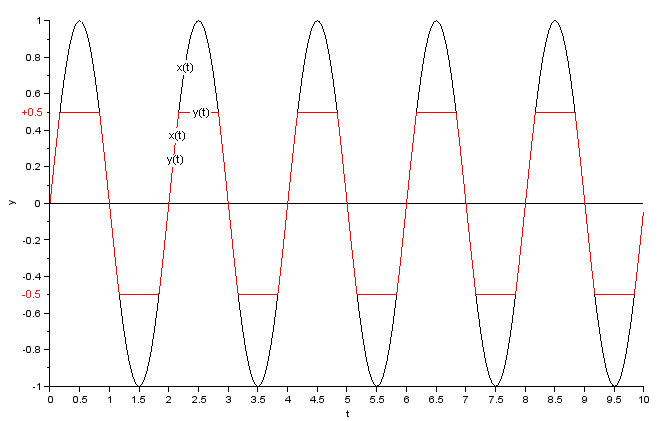 Chapter 34.2.3 The linear element with the dead band and saturation
Wywołaj PID/20_regulacja_i_nasycenia/2_strefa_martwa 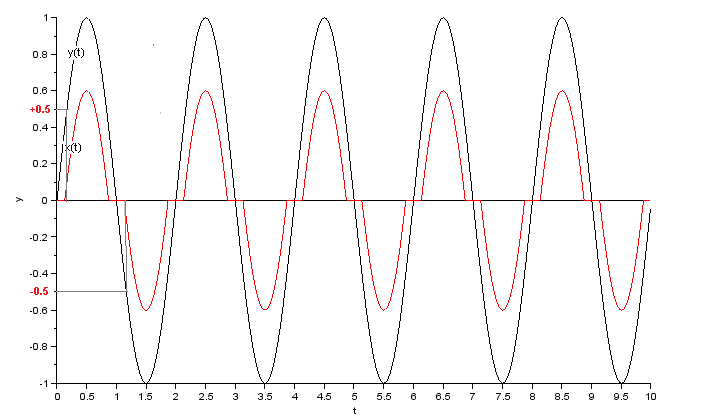 Chapter 34.3 How does the ideal control system work?
E.i the linear control system.  It’s most popular experiment in this course but it does no harm repetition. 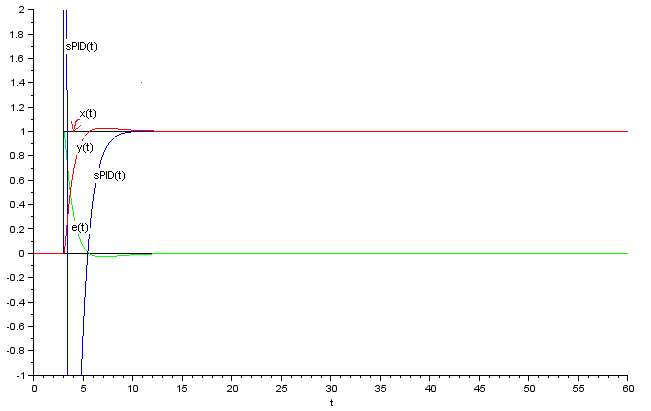 Fig. 34-11
It may be temperature control system and  +1 means +100°C.
The integral I component made null control error, as usual. The process is very fast because of the big sPID(t) control signal amplitudes. The driver uses strongly gas pedal and brake pedal. The effect is a dynamic drive. The controller job is the same. The gas pedal is a big positive sPID(t) and the brake pedal is a big negative sPID(t).
Let’s change the oscilloscope parameters and observe the real sPID(t) (not “cutted”) signals.
Call  PID/20_regulacja_i_nasycenia/04_PID_ideal_pelen_widok.zcos
The block diagram is the same but there are other oscilloscope parameters. You will see all the sPID(t) signal.
Click “start” 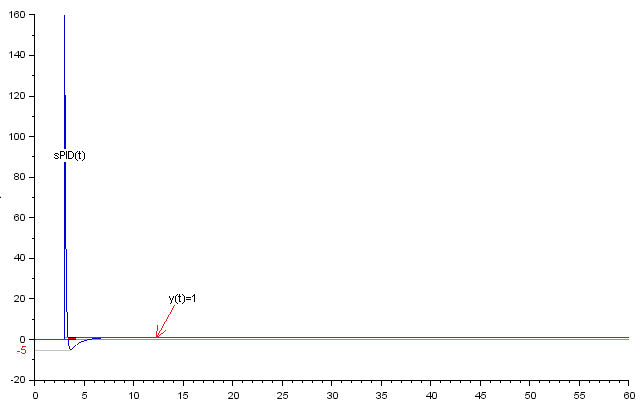 Fig. 34-12
The main x(t), y(t) signals are small and hardly visible now but you see all the sPID(t) control signal majesty! Compare please x(t), y(t) circa 0…+1 range and sPID(t) range -5…+160. This is a reason of a very good y(t) dynamic–>”brake and gas” control algorithm.
The real control system  has power limits. Any design engineer will not give 160 kW power when steady state process requires 1 kW only! The negative power (cooling for example) is also rarely used.
There is a difference between theory and practise*. The real system have the control signals limits. There are saturations 0…+1.5 instead of  -5…+160. The range is even more narrow 0.2…+1.5! The power off causes y(t)temperature decrease up to ambient temperature +20°C and not to 0°C.
The linear systems are smart, relatively easy and there are answers  for many general questions. Stability, Hurwitz etc… The real systems are different. The problem is how big is this difference.
*I have seen the poster in the worthy control systems company
Practitioner- All is operating but he he don’t know why
Theoretician-Nothing is operating but he knows why
Our company combines practice and theory. Nothing is operating and we don’t know why. I took to them quickly.

Chapter 34.4 How does the real control system work?
Chapter 34.4.1 Introduction

Fig. 34-13
I try to argue that the main nonlinearity in the real systems is a power amplifier-other names final element or actuator.
We will analyse power amplifier, PID controller and the object.

Chapter 34.4.3 PID controller
This almost a linear unit and its transfer function is:

Fig. 34-14
The appropriate  Fig.34-13 controllers parameters are:
Kp=10
Ti =7 sec
Td=2 sec
Note This is a real differentiation, not ideal!
Comment to word “almost a linear unit”
The PID controllers are mostly the microprocessor type devices. They can calculate every sPID(t) control signal digital value–>there are no limits here. Some people will complain that this value is quantum timed. But these quantum times are very small compared to object inertia and  PID is for us a pure tranfer function Gpid(s).

Chapter 34.4.4 G(s) Object
Object is a furnace, rectifying column or rocket. There are weaker linearity arguments than PID. The most popular static object
characteristic is Fig. 34-5c type–> “more and more slowly with the saturation”.
What’s the conclusion?
The G(s) nominator e.i. unit static gain k=1 only for null working point, then is lower. The dynamic parameters T time constants also may change due to working point. It means that the real parameters are “fuzzy”. They change in the some range.

Chapter 34.4.5 Conclusions
– PID controller is a linear unit Gpid(s)–>Fig. 34-14.
– Object is a linear object too but with some toleration dose.
– Power amplifier  is a nonlinear unit–>linear with the saturation.  This unit (other names- final control element, actuator). This element “perverts” all the closed system unit, makes it nonlinear.
The actuator exists always (almost) in closed loop systems. It means that all (almost!) closed loop systems are nonlinear and all the theory (G(s) units configuration,Nyquist, Hurwitz…) isn’t necessary. Fortunately the situation isn’t so bad. 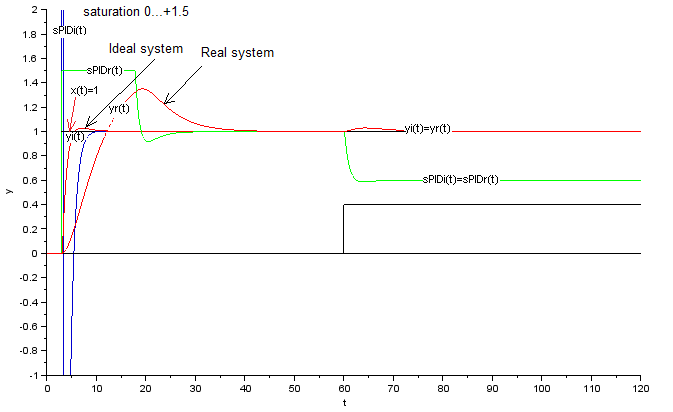 Fig. 34-18
The set point x(t)=1 step is in 3 sec and the disturbance z(t)=+0.4 is in 60 sec.
IDEAL SYSTEM  without saturations.
The PID has control signal with -infinity…+infinity amplitudes at disposal. The step yi(t) response is fast and assures null  control error. It’s possible beacuse big sPIDi(t) control signal has big amplitudes and “brake and gas” control algorithm is used here–>see Fig. 34-12–>blue sPIDi(t)–>“brake=-5 and “gas=+160“.
REAL SYSTEM with saturations 0…+1.5
The PID has control signal with 0…+1.5 amplitudes at disposal. It means that “brake and gas” effect is weaker than for ideal system–>real–>green sPIDr(t)–>“brake=0.9 and “gas=+1.5“. The set point x(t)=1 response isn’t fast as ideal. There is even 30% overregulation here! On the other hand. The “brake and gas” effect is circa 100 times weaker than for ideal system. But the setting time isn’t  100 times worse! And the most inportant. There is null steady error.
The main conclusion. The nonlinearity (saturation here) impairs the quality of the control systems but “not to bad”.
Note that z(t) disturbance supressions are the same for ideal and real systems! The real green sPIDr(t) control signal doesn’t exceed the saturations now and that’s a reason. 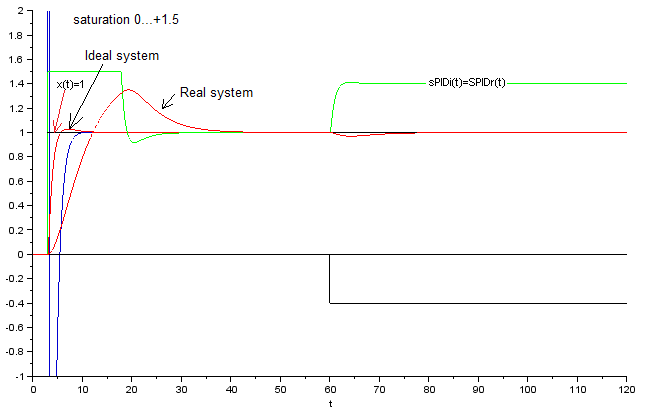 Fig. 34-20
The set poin x(t)=1 response is the same and it’s obviously. The z(t)=-0.4 (cooling) was compensating by the green sPIDr(t) control signal increase (heating) 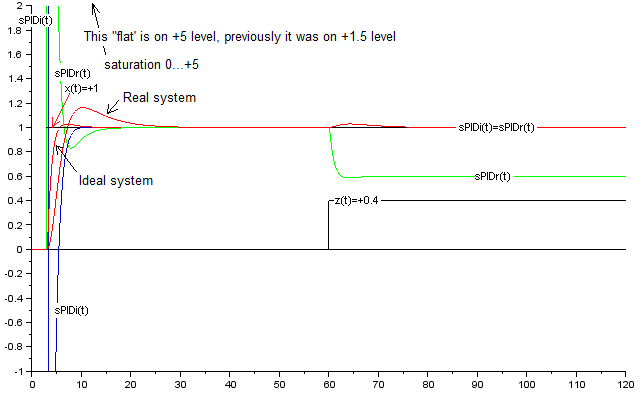 Fig. 34-21
The set point x(t) response is faster (better) than by 0…+1.5 saturation. The z(t)=+0.4 disturbance suppresion is the same as ideal because sPIDr(t) doesn’t exceed 0 saturation value. 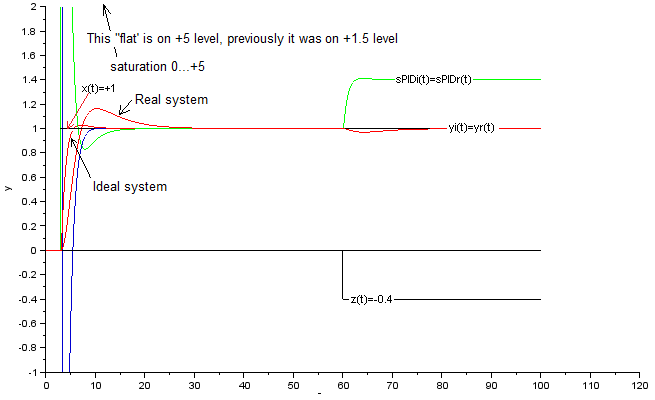 Chapter 34.6 The set point x(t) exceeds the saturations levels.
Chapter 34.6.1 The first approach – signals x(t), yi(t) and  yr(t) only
Let’s assume that PID “wishes” to heat the liquid up to +105 °C. But the actuator (or other name power amplifier)  has a maksimal power +0.95 kW and it enables +95 °C only. The PID can’t do this job. It’s impossible as a leader who demands  from his employee more than  employee  professional competence.
Call Desktop/PID/20_regulacja_i_nasycenia/09_PID_nas0…+0.95_skoki_-1…2_simple 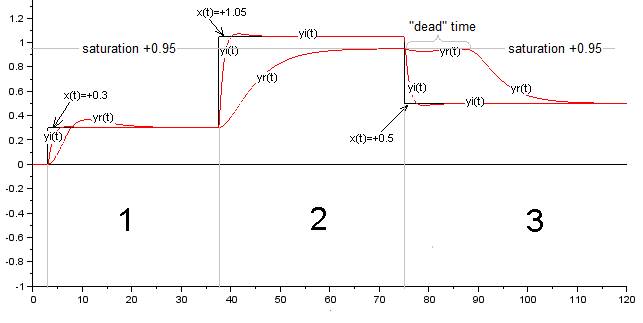 Fig. 34-24
Period 1 x(t)=+0.3
The x(t)=+0.3 is lower than +0.95 saturation. The feedback will be active and the behaviours are discussed in the  Chapter 34.5. The real yr(t) response is slower than ideal yi(t)  and with the overregulation but null control error condition is fulfilled.
Period 2 x(t)=+1.05
The ideal yi(t) is obvious because there are no PID control signal limits. The real yr(t) can’t attain x(t)=1.05 because it exceeds the saturation 0.95 level of the real PID. The feedback doesn’t work and the response is as for open loop system.
Period 3 x(t)=+0.5
The setpoint x(t) falls rapidly up to +0.5. The ideal system reacted immediately and the steady state yi(t)=x(t) is quickly attained. The real steady state yr(t)=x(t) is slowly attained. The feedback works again because  the sPIDr(t) control signal is in the inside of the saturation range 0…+0.95 again. But what’s about the “dead” time? It wasn’t in the period 1. I propose to test sPIDi(t) and sPIDr(t) control signals.

Chapter 34.6.2 The second more accurate approach
We will observe the  sPIDi(t) and sPIDr(t) control signals of the PID. Do we discover the “dead” time reason?
Call desktop/PID/20_regulacja_i_nasycenia/10_PID_nas0…+0.95_skoki_-1…2.zcos 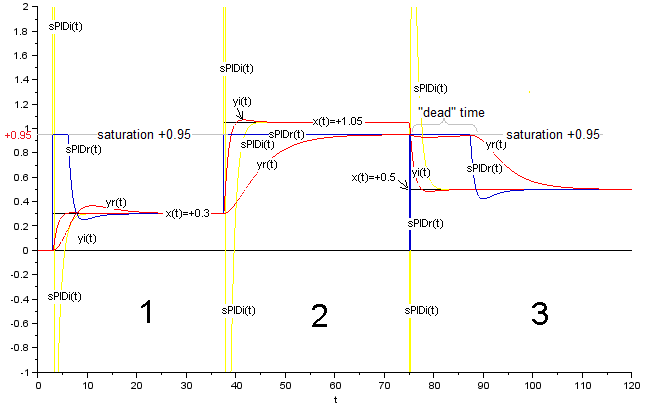 Fig. 34-26
The ideal system is obvious.
The sPIDr(t) of the real system in the period 2 is limited by the saturation and sPIDr(t) =x(t)=0.95. The feedback doesn’t act now the yr(t) is an opened loop type now. But the “dead” time in the period 3 remains mysterious.  I propose to observe sPIDir(t) signal before power amplifier. 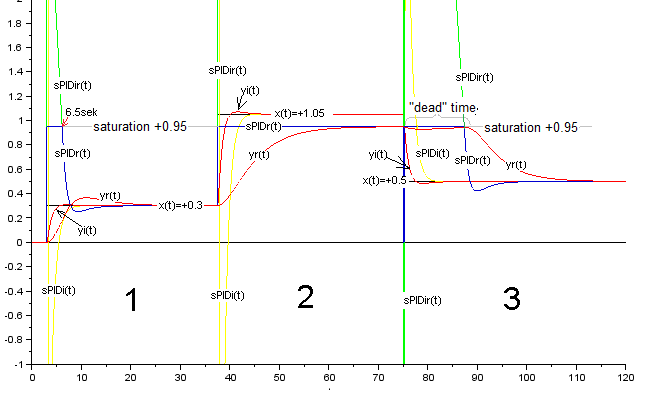 Fig. 34-28
Ideal System
The yellow sPIDi(t) control signal (fuzzy colour!) is obvious and doesn’t require the comment.
Real System
We observe the green  sPIDir(t) before the power amplifier. The i letter in the name sPIDir(t) suggests that the signal is after the ideal part of the real PID cpontroller.
Period 1 x(t)=+0.3
The green sPIDir(t) is bigger than saturation +0.95, therefore the blue sPIDr(t) control signal will be cutted.  There isn’t feedback now and yr(t) arises up to +0.95 as an opened loop system. The feedback shows after 6.5 sec and the yr(t) attains steady state yr(t)=x(t)=0.3 after circa 25 sec.
Period 2 x(t)=+0.95
The sPIDir(t)=+0.95 all the period 2 and yr(t) is going to +0.95  as opened loop system.
Period 3 x(t)=+0.5
Something is clear with the “dead time”. The control  signal blue PIDr(t)=+0.95=saturation during the “dead time”! It’s steady and it means that feedback doesn’t work here! It works after the “dead time” and the steady state yr(t)=x(t)=0.5 is attained after circa 110 sec. Is the “dead time” secret hidden in the green sPIDir(t) signal? Let’s look at this not cutted by the oscilloscope signal. 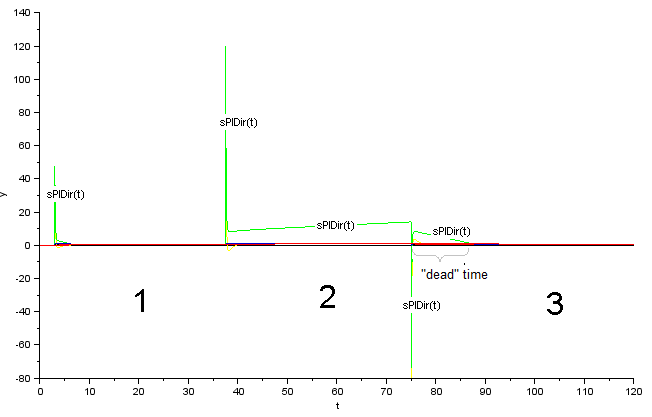 Chapter 34.6.5 Conclusions
1. The PID control is possible when the set point x(t) signal is inside the of the power amplifier (other name is final control element or actuator)  range. It’s obviously. It’s impossible to heat a bath of water up to +100°C when you dispose a small electrical immersion “glass” heater.
2. When the et point x(t) signal is inside the range  of the power amplifier –>  the integral I of PID is able to assure null control error.
3. The wider is power amplifier output signal range–>the more similar to ideal is a real system.
4. The “dead time” of the PID control reason is a exiting from the PID saturation state.  This is an harmful effect because there are time delays.*  How to counteract? The PID “feels” that it’s in the saturation state (The signal from valve end contact or output y(t) signal is steady when PID control signal arises) and changes its structure to PD controller. The integration doesn’t act.
5. The smaller is the set point x(t) signal the more are the real and ideal systems similar.
6. The real and ideal systems disturbances suppresions are similar often. The similarities are closer when the z(t) disturbances are smaller.

* The time delay To is always harmfull in the control systems. An example. There is To=1 sec delay between steering wheel and the wheels. How is it made? No important. Is this a secure car?