How does it work? Automatics, computers, etc... > 32. Disturbances analysis 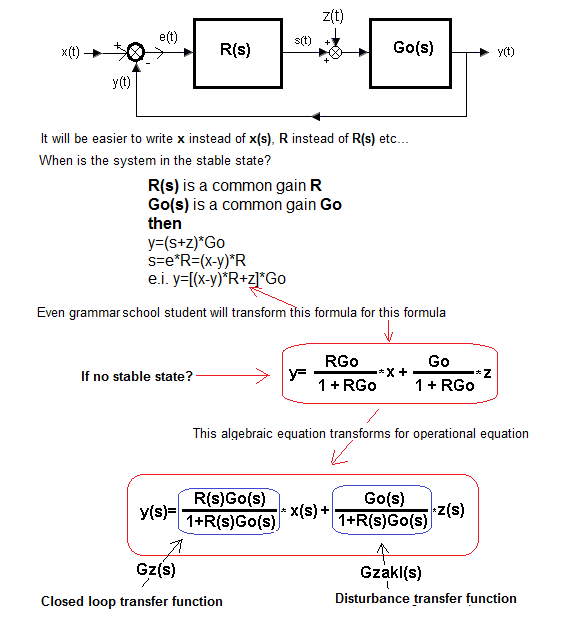 Fig. 32-2
Note that Gz(s) trannsfer function is the same as a “most important control theory” formula. 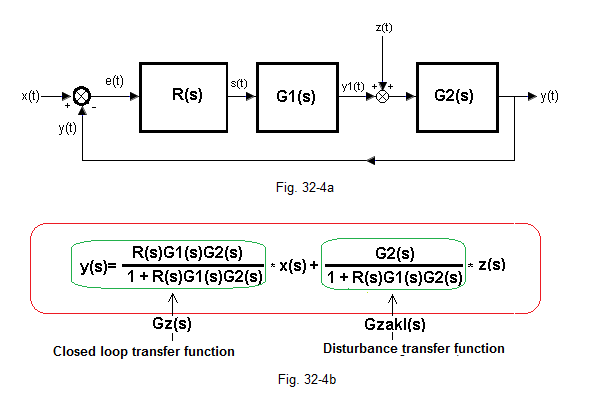 Fig. 32-5
The exchanger is intended for control systems analysis, not for thermal engineering teaching. We do very big simplifications then.
1-The liquid doesn’t  steam and freeze.  All temperatures are allowed even +100000ºC or -100000ºC! The last temperature doesn’t exist in the world really but it exists in in this course world.
2-Positive voltage on the immersion resistant heater heats and negative cools! This is so-called Peltier element known from the XIX century.
3-The mixers (not visible in the figure)  are working all the time in the both tanks. It means the momentary  liquid temperature Tc1 is the same in every tank1 place.  The analogical is Tc2 in the tank1. The Tc1 is mostly different than Tc2. These temperature depend on the set pont x(t). The set point x(t) voltage is a input signal to the tank 1, because voltage gain of the power amplifier is ku=1. The heat is transferred from tank1 to tank2 by the aid of coiled tubes and circulating pump.  The momentary liquid temperatures in the 2 coiled tubes  are the same Tc1 . It means that Tc1 is an input signal to tank2. Tc3 is a temperature measured by the thermometer. Tc3 is a little delayed by the inertia of the metalic thermometer case. There is Tc1=Tc2=Tc3 in the steady state.
4– Step type set point x(t)=+10V (corresponding +100 ºC)  will cause after some time the Tc1=+100 ºC  and after some time Tc2=+100 ºC and after some time Tc3=+100 ºC as a +10V on the thermometer.
Note that set point x(t)=+10V caused y(t)=+10V after some time. It’s like a amplifier K=1 with 3 inertia. All this complicated system is replaced by the simple electronic amplifier with inertia! The analysis is much easier now.
Analogically
+5V–>Tc1=Tc2=Tc3=+50ºC–>+5V
0V–>Tc1=Tc2=Tc3=0ºC–>0V
5– Null initial state Tc1=Tc2=Tc3=0ºC
6– Power amplifier ku=1 (emitter follower for example) ensures constant voltage on the resistant immense heater, regardless of its resistance.
The set point slider is set immediately from low to up position. It’s typical step type x(t)=+100ºC signal.  What are the Tc1, Tc2 and Tc3 signals?
Call Desktop/PID/18_analiza zakłóceń/01_3T.zcos 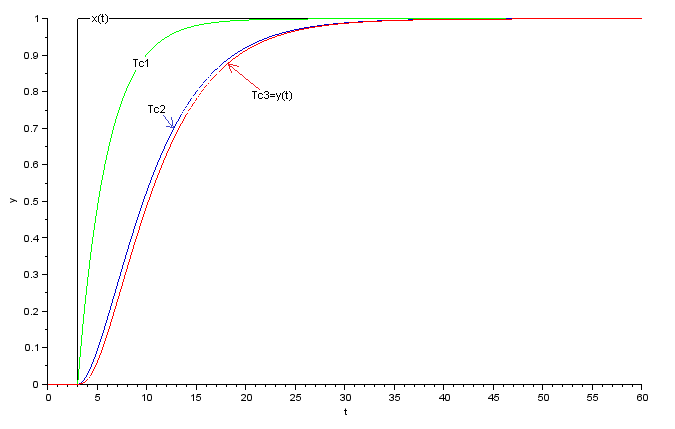 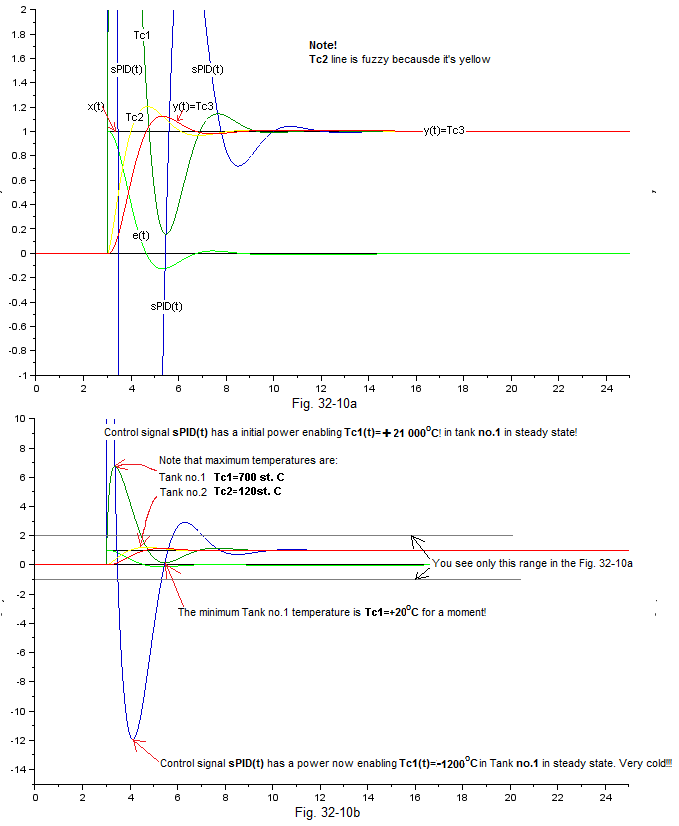 Chapter 32.4 The temperature control of the heat exchanger with the disturbance in different places.
Chapter 32.4.1 Introduction
Return to the formulas in the Fig. 32-4b, especially to the conclusion – “The more is the z(t) disturbance “right”  the more distinct is y(t) responce”.  The next subchapters  confirm it.
The positive disturbance-additonal heater will be given before first, second and third inertia in Fig. 32-8. Finally will be given the most mean disturbance-directly for output y(t) e.i. for thermometer output.

Chapter 32.4.2 Disturbance before first inertia-additional heater by the heater of the tank no. 1.

Fig. 32-11
The positive z(t)=+0.4 disturbance is a contact short circuit e.i +4 V on the additional resistance heater next to main heater in the tank no. 1. It causes additional heating. The main and additional heater resistances are equal. E.i. these same voltage steps cause this same temperature liquid increase.
Call Desktop/PID/18_analiza zakłóceń/03_3T_pierwsza_inercja_+zakl.zcos 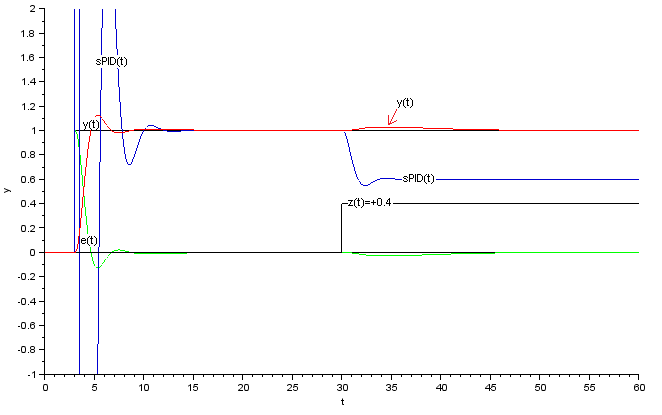 Chapter 32.4.3 Disturbance before second inertia-additional heater by the  coil tube heater of the tank no. 2. 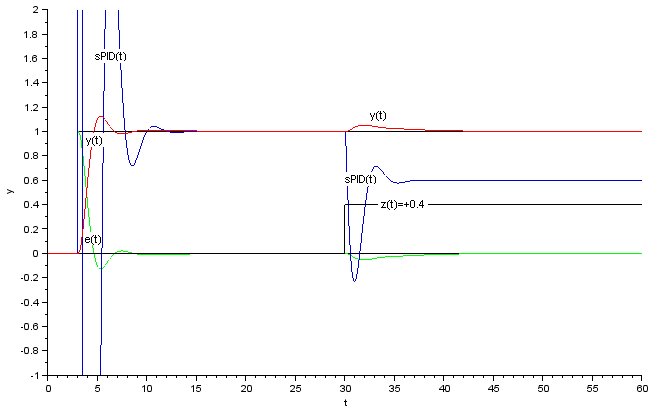 Fig. 32-16
The x(t) response is the same as before. It’s obviously. But the y(t) suppresion is more rapid now. It confirms the Fig. 32-4b conclusion. The more is the z(t) disturbance “right”  the more distinct is y(t) responce. The  blue sPID(t) controller reaction  is more rapid too.

Chapter 32.4.4 Disturbance before second  inertia-additional heater acts directly for a thermometer
The disturbances acting directly for output or near output are most mean. The resistance wire is is winded on the metalic thermometer case here.

Fig. 32-17
There are 2 influences on thermometer
– Liquid temperature Tc2 of the tank no. 2
– “Winded” resistance heater – the z(t)=+4V disturbance
Call Desktop/PID/18_analiza zakłóceń/05_3T_trzecia_inercja_+zakl.zcos 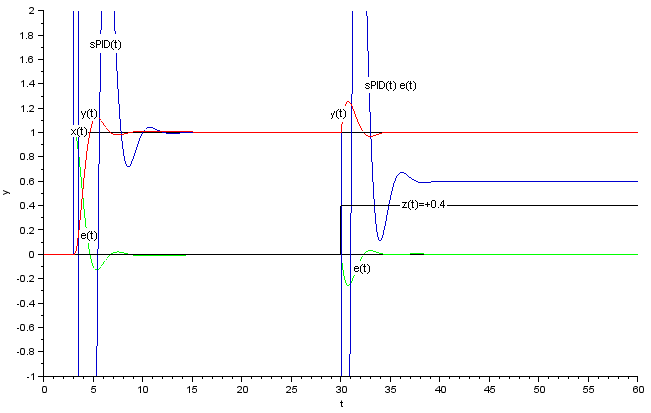 Fig. 32-19
The system behaviour is similar but more rapid than before. The positive 40% additional heating was compensating by the 40% power decrease and y(t)=Tc3(t) returned to its previous value y(t)=1–>+100ºC. It’ absolutely true but Tc3(t)=+100ºC isn’t a liquid Tc2(t) temperature in steady state! Let’s test Tc2(t) time process.
Call Desktop/PID/18_analiza zakłóceń/06_3T_trzecia_inercja_Tc2_+zakl.zcos 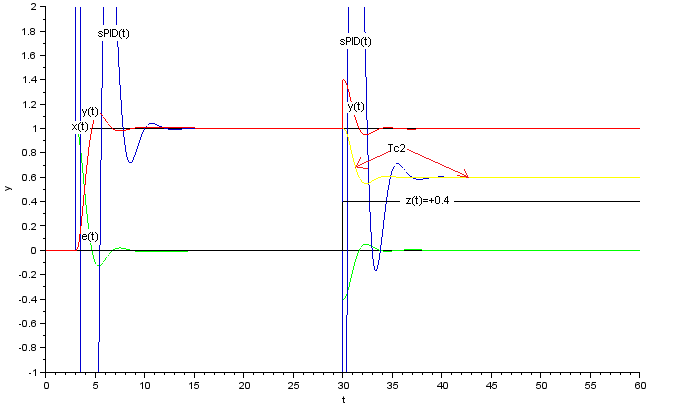 Fig. 32-21
Note-The Tc2 temperature is a “fuzzy” yellow colour!
The PID, as every moral controller, tries to compensate the disturbance and do x(t)=y(t)=Tc3. And controller succeed  in his job–> y(t)=x(t)! But the themometer value is falsified by additional themometer value. Thermometer “thinks” that is a Tc3=Tc2+40ºC=100ºC but the real liquid temperature is  Tc2=60ºC!

Chapter 32.4.5 The most mean disturbance-Directly on output, after themometer!

Fig. 32-22
It seems like a sabotage! Somebody connected to the transmission wire a special device-adder. Controller thinks that the temperature is now y(t)=Tc3+z(t). Remember that PID tries to do steady state x(t)=y(t) so the real temperature will be Tc3=x(t)-z(t).
Call Desktop/PID/18_analiza zakłóceń/07_3T_za_-trzecia_+zakl.zcos 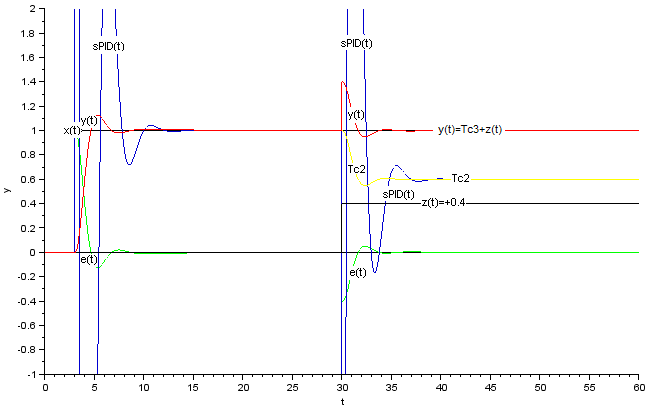 2. The most mean disturbance-directly on output or on controller input
The Fig. 32-21 is an example when disturbance z(t) is near the output and the Fig. 32-24 when disturbance z(t) acts directly on output. This phenomenon is known not only in the control theory. The most mean are the activities directly for a decision-making processes. Do you know   Ken Follet-author  “Eye of the Needle” -World War Two times? The german spy “Needle” informed Hitler that D-day in 1944 will be here and not here.  Hitler made fatal decision in connection with falsified information.  “Needle” was a bad sensor-the analogy is quite visible here.
The disturbance z3(t) acting directly on controller input Fig. 32-25c is mean too. The controller “thinks” that the set point x(t) is changed now.