How does it work? Automatics, computers, etc... > 1. Introduction

Chapter 1 Introduction
This is also an introduction to the next “Fourier Transform”and “Laplace Transform” articles from the upper tabs.  They will come down in the future.

Chapter 1.1 Every f(t) time function is a sinusoids sum!
Maybe not every* (see below), but don’t be particular. The most easy are the f(t) periodic functions when t=-∞…+∞ as as Fig. 1-2c.
This is just a job for Fourier Series.
But when time is finite–>single rectangular pulse or time is infinite and the energy is finite as RC discharge voltage?
This is just a job for Fourier Transform.
But when time and energy are infinite–>step 1(t) or f(t) as quadratic function for example?
This is just a job for Laplace Transform.
Conclusion
Fourier Series, Fourier Transform or Laplace Transform spread f(t) functions over many sinusoids sum. The sinusoids amplitudes, frequencies and phases may be different! 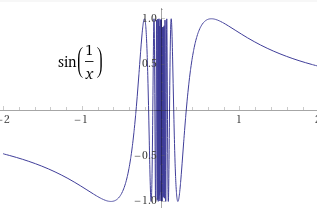 *– strictly, “almost every” function except above dag function type.

Chapter 1.2 Trigonometric Fourier Series
Every periodical function f(t)  is  with the aid of Fourier Series approximated. This function is time f(t) function, but it may be distance  f(x) function equally.

Fig. 1-2
Trigonometric Fourier Series
Note:
The alternative currents are described by f -frequency or by ω-pulsation. The f -frequency are used by everyman and the ω-pulsation are used by electricians. The formulas with ω are mostly shorter.
Fig. 1-2a Formula with the sigma sign
Fig. 1-2b Formula without the sigma sign. It’s more clear for me and we will use this notation later. The consecutive a1,a2,…b1,b2 amplitudes and especially 1ω,2ω…pulsations  are more visible here. Note that the consecutive pulsations are multiplies.
Fig. 1-2c  f(t) periodical function example with the T period.
The a/m formulas are exactly for n=∞ only. It’s an approximation for finite n mostly. Why mostly and not always? The Fig. 2-3 in the next chapter is  an answer.

Chapter 1.3 Complex Fourier Series
It’s simpler but less clear in the first moment. There is an analogy with the the Solar System. The Earth circles around the Sun, the Moon circles around the Earth… etc. More–> see more Fig. 3-16 Chapter 3.4.2

Fig. 1-3
Complex Fourier Series
Fig. 1-3a Formula when sigma (sum) sign used.
Rys. 1-3b Formula without sigma. More clear in my opinion. The formulas are transparently simpler than Fig. 1-2. But there are used complex numbers! I propose the article “Complex Numbers”–>upper tabs.
Note
The right formula sides are complex numbers but the left sides are real numbers! Why is it possible. The explanation is simple. All the imaginary parts are mutually compensated!

Chapter 1.4 What is that’s all for?
Fourier Series emerged 200 years ago, but they put to use in our times. Moreover, this ology expands now! The so-called Fast Fourier Transform algorithm was invented only in 1965 year by Cooley and Tuckey.
There are many fields of science with “Fourier”.
Acoustics for example
Word “hello” is registered with the aid of microphone.
Author  Erik Cheever. By the way I recommend his great article  https://lpsa.swarthmore.edu/Fourier/Series/WhyFS.html . Click sound register push-button. The “hello” is heard.
Fig. 1-5
Word  “Hello” registered as:
Fig.1-5a  f(t) time function. It begins when t=0.1 sec and ends when t=0.6 sec. It’s very complicated. How does study it?
Fig.1-5b F(ω) spectrum-sum of particular sinusoids. Every sinusoid is characterized by amplitude, frequency  (strictly ω-pulsation here) and phase. The figure has amplitudes and frequencies only and  no phase. So there is no signal full information. But this signal visualization is transparently simpler than Fig.1-5a! The first advantage you will see in the next experiment. 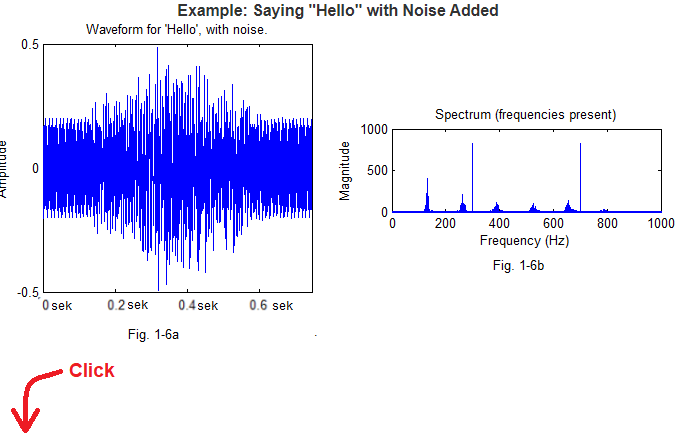 Click sound register push-button. The “hello” + noise signal is heard.
Fig. 1-6
Word  “Hello”+noise registered as:
Fig. 1-6a f(t) time function.
The noise-continuous ton isn’t very complicated but the f(t) changed. Where dooes search for noise here?
Fig.1-6b F(ω) spectrum. The spectrum changes are small in comparison to Fig.1-6a. There are only 2 additional fringes for sinusoids 300Hz and 700Hz. You can cut out them and the sound will be clear again. How to do it? This is a different matter. FFT may be usefull for example.
You see an advantage (F(ω) spectrum contra f(t) function) I hope.

Chapter 1.5 Other “Fourier” applications
Digital image processing
You use it every day in your mobile as camera.
The first and most obviously image processing is to consider a picture a set of pixels. Every pixel has parameters-x,y position, brightness and RGB colours. This approach to the matter requires many memory and is difficult to processing.
The second and commonly used is “Fourier” – more strictly FFT Fast Fourier Trannsform method. The picture is transformed for many sinusoids with parameters amplitude, frequency and phase. It requires less memory and is easier to processing.
Have you seen the coloured World War One films. They were made as black and white with the aid of the primitive cameras. Many noises! But Fourier Transform improves these pictures!
Machines diagnostics
The turbogenerator should be ideally balanced. There are tonnes of rotating mass! The ideal machine gives the ideal  F(ω) spectrum. Every swarf on the shaft changes this F(ω). The ear can’t detect theses changes but F(ω) does it! There is often a single fringe caused by a single swarf.
Earthquakes
Forunately, this is a problem for some people only. For example, California residents. The seismograph , that is f(t) earthquake  function, is changed for  F(ω) spectrum. The spectrum for California may be typical. Some frequencies are stronger (strictly-their amplitudes) and some weaker. This is very important information for civil engineers. They will install big swinging masses in some floors of the skyscraper. They will swing with the anaphase of the building! The building is more earthquake resistant now!
Automatics
Automatics and differential equations  are strongly connected. Fortunately there are linear differential equations when some simplificationa are assumed. The differential equations are easier to solve when f(t) function is transformed to the F(s)-Laplace Transform. It’s something similar to F(ω) Fourier transform. So the f(t) is treated as sinusoids sum. Sinus and cosinus are  easy to differentiate and the differential formula is changed for quadratic equation (n=2) or higher degree (n>2) equations. These algebraic  are easier to solve.
Medicine
The electrocardiogram (ECG or EKG) records the electrical signal from your heart to check for different heart conditions. It used by cardiologists.  The encephalogram is a brain signal and is used by neurologists.
These doctors study precisely a/m signals and then they know the disease. They are deeply involved in Fourier tools. –> see youtube Click