20. How does feedback work?

How does it work? Automatics, computers, etc... > 20. How does feedback work?

Fig. 20-1
Fig. 20-1a
The output signal y(t) is fed back to input. But what is a cause and effect? What was first egg or hen? I will not ask this existential questions. Let’s treat this configurattion as a curio.
Fig. 20-1b
There is a need to contact with the outside world. It’s realised as error e(t)=x(t)-y(t)  calculation in the so-called subtractor. It’s the most important configuration in the control theory. Its working must be for you pure and simple,  as a biking. This is main goal of all this course!!!

Fig. 20-2
There is adder instead of subtractor. It realizes sum of signal e(t)=x(t)+y(t) instead of difference as in Fig. 20-1. It’s something wrong rather. Linesman mistakes the input “+”  for “-” for example. The positive feedback is easier to understand and that’s the reason of this subchapter. 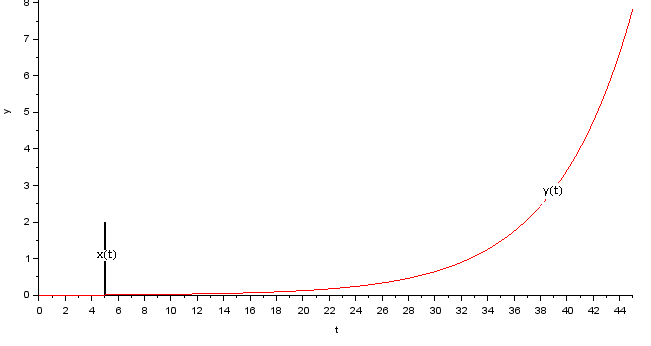 Fig. 20-4
The single “needle” pulse x(t)  is passing through inertial G(s) and is returning as y(t)  to the G(s) input again. Please note that  x(t) is active during a small time! The x(t)=0 then. The returnig y(t) is amplified K=1.5 and returning once more… etc. The classical avalanche effect! Please note that K=1.5>1!
We suppose that every positive feedback means instability-avalache effect. Really? Let’s go to the next chapter.

Fig. 20-6
The response y(t) is stable and inertial type.
The parameters Kz=4 and Tz=15 sek show that:
-the gain increased from 0.8 up to 4
– time constant increased from T=3 sec up to Tz=15 sec. The unit is more “lazy”.
The main conclusion is that dynamical object G(s) with positive feedback may be sometimes stable! 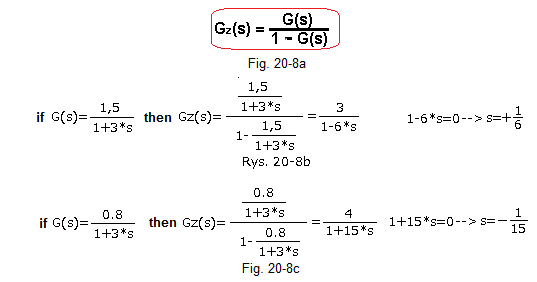 The system is stable when the G(s) takes all negative roots in the nominator.

Do you know so-called complex numbers?*  The statement will be more precisely now.

The system is stable when the G(s) takes all roots with the negative real part in the nominator.

*We will discuss it in the Chapter 23.

Chapter 20.3.2 How does the inertial unit come to the steady state?
Call Desktop/PID/06_sprzezenie_zwrotne/10_otwarty_inercyjny.zcos 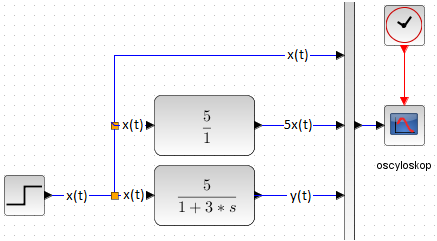 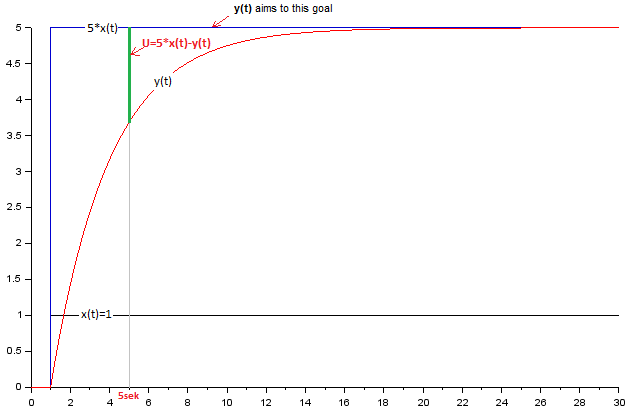 This conclusion is so obvious, that reader wonders-what’s the matter?

Chapter 20.3.3 How does inertial unit with the negative feedback come to the steady state?
The open loop unit (as previous) operation is easier to understatnd, than with the negative feedback. But you will be be convinced that the mode of action is such as inertial in open loop in previous chapter. This is the answer for  the question also–> see above.
Call desktop/PID/06_sprzezenie_zwrotne/03_zamkn_inercyjny

And when will  y(t) come to a stop? Other words. When will be balance-steady state? Signal y(t) will come to a stop when the “motive force”-green line will disappear. I. e. y(t)=K*e(t).  This experiment confirms something important in control theory.

This is fullfiled for all static dynamic dynamic units. Not only inertial.
It must be as clear as biking for you. Please note that it involves stable systems only.
Do you remember Fig. 19-17e Chapter 19? You weren’t convinced yet that y(t)=K*e(t). You know now and the the proof is experiment Fig. 20-12. The lines 5*e(t) and y(t) crosspassed in the balance point  5*e(t)=y(t). You can easy derive the formula for steady gain Kz when negative feedback

Chapter 20.3.4 How does inertial unit with the big negative feedback come to the steady state?
We will observe the additional signal error e(t).
Call Desktop/PID/06_sprzezenie_zwrotne/04_zamkn_inercyjny_K100.zcos 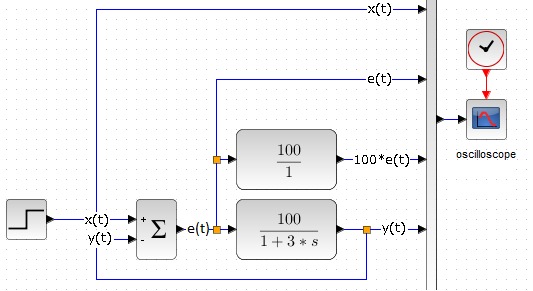 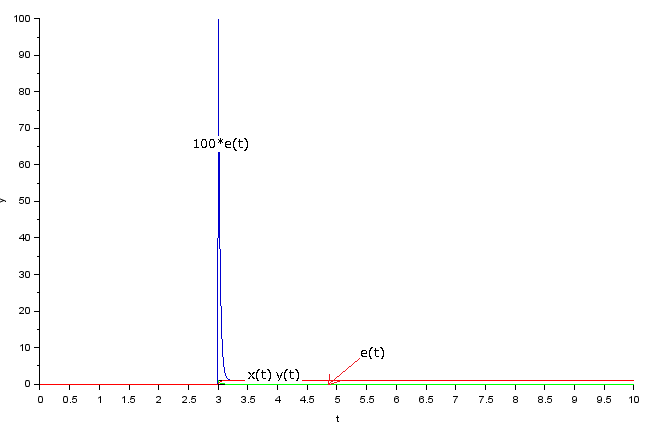 Fig. 20-15
You observe all “variable goal” 100*e(t). It strikes eye the big size of this signal next to others x(t),y(t) and  e(t).
You will know that is Proportional or P type control then.  There is a typical big control signal at the beginning.  The x(t),y(t) and  e(t) signals aren’t good visible here. Let’s reprise this experiment with changed oscilloscope parameters.

Call desktop/PID/06_sprzezenie_zwrotne/05_zamkn_inercyjny_K100_inny_widok.zcos
The scheme is exactly as Fig. 20-14 but there are different oscilloscope parameters now.
Click”Start 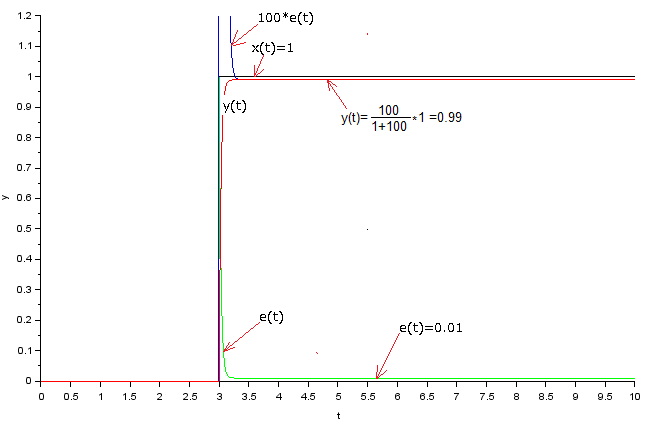 Fig. 20-16
The main conclusion is the short setting time when K is big. The time constatnt T≈0.03sec  instead T=3sec when open loop. The negative feedback is good for dynamics!

Chapter 20.3.5 How does double inertial unit with the big negative feedback come to the steady state?
The previous inertial unit came to steady state “underarm”–> It was y(t)<5*e(t) always. But the control process is with the oscillations very often.
Call Desktop/PID/06_sprzezenie_zwrotne/06_zamkn_dwuinercyjny.zcos 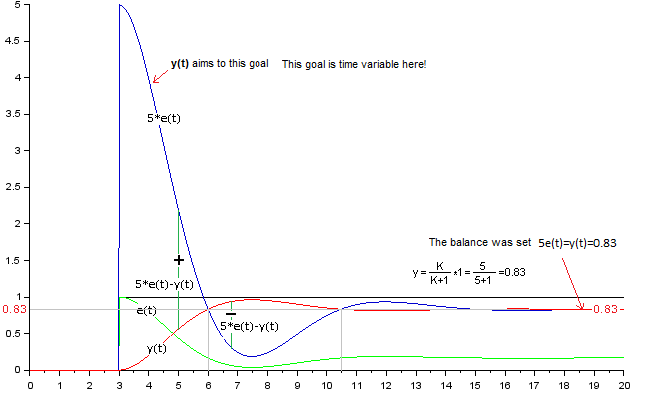 Fig. 20-18
The y(t) achieved the state 5e(t)=y(t) quickly in the 6 sec. It’s supposedly “steady state” but the y(t) goes like the clappers on.  It isn’t real steady state because the y(t) derivatives are’t null now. It will be real steady state 5e(t)=y(t) in 18 sec. and after. Please note that the green “motive” force was postive up to 6 sec. It’s negative then! (6…11sec). It means that  green “motive” force changed to “braking” force! The steady state was y(t)=5*e(t) achieved after some oscillations here.

Chapter 20.3.7 How does astatic unit come to the steady state?
The title is provocative a little. You will know why.
Call Desktop/PID/06_sprzezenie_zwrotne/07_otwarty_calkujący
Fig. 20-20

The special x(t) signal type will be given to see typical astatic units behaviour.
Click “Start” 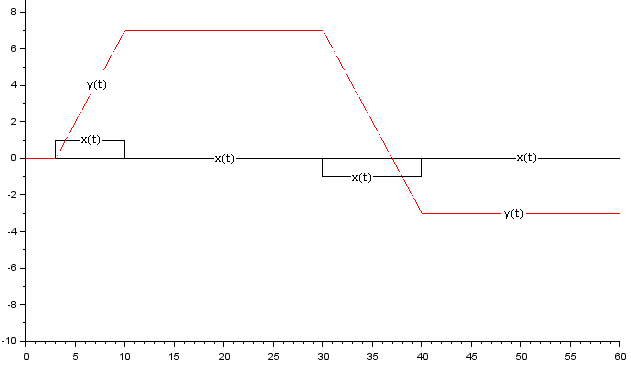 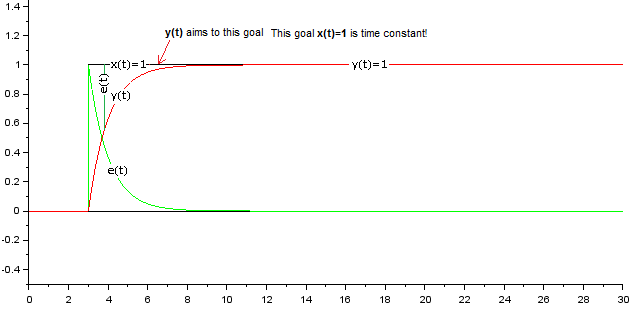 Chapter 20.7.4 What a important subject was absent in this chapter?
1- Unstability –> The next chapter
2- Open loop Fig. 20-9 assures x(t)=y(t) in steady state when K=1. It means that e(t)=0! The question is now. Why do complicate the life to use negative feedback to assure x(t)=y(t) steady state. The answer is simple.
Negative feedback assures:
– resistance for disturbances
– better dynamiccs- You don’t need exactly mathematical object G(s) description. There is a need of the good sensor only.