How does it work? Automatics, computers, etc... > 2. Ring Buffer animation

How does Ring Buffer work?

Chapter 2  Ring Buffer animation
Chapter 2.1 Introduction
The animation is a very strong tool.  You observe the consecutive Ring Buffer states only instead of the vague text “the first byte is entering the buffer , provided that the falling edge of the clock pulse… etc.

Chapter 2.2  How does come  in and walk out of the every animation
The animation is the main advantage of this article. The interpretation is very easy then and the added text will be not necessary probably! Animation is based on the Scratch language. You don’t need to know and install it!
I recommend to turn on the audio in the computer. It isn’t necessary but it is very helpfull.
Additional Scratch requirement:
– Classical computers and laptops only. No mobiles and tablets!
– Adobe FlashPlayer. Everybody almost has it.
You call animation by clicking the text animation located under the majority of the figures–>see Note. You come to appropriate SCRATCH server site then, but you leave this article site simultaneously! So you need to return to the article when you will finish the animation. You do it by clicking the classical windows „return to previous site” push-button with the arrow–>see Fig. 2-1.
And my friendly advice. Don’t click clock-zegar too quickly! Give system the chance to react!
Note
When you click  animation–>Scratch may ask you in polish language to click “Adobe Flash Player” symbol! Do it of course. 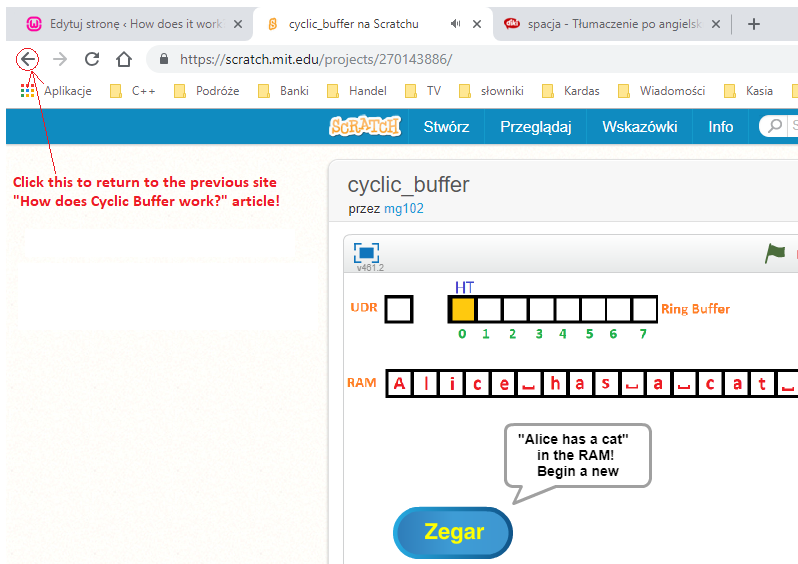 Fig. 2-1
How does return to the article from the animation?

Chapter 2.3 Ring Buffer animation
Click the text ANIMATION under  Fig. 2-2 and the green flag then to set the initial state.
The computer speaker on will be very helpful!